Chance of a lifetime

I can’t believe I’m writing these words as soon as I am:

I’M GOING TO BE A MOM

Our agency called today and we have a referral. He was born 8/8/06 which means he’s already three weeks old! They are sending us the whole package tomorrow - pictures, video, history, medicals, etc. I've been told I'm supposed to sleep tonight - but I doubt I will sleep another night until he's safe in my arms.

I wish it didn’t have to be like this. I don’t feel guilty for my place in this world. I feel lucky and honored. Tomorrow, after a 12-year journey to become a mother, I will finally see my son’s face for the first time. My broken heart is finally on the mend. At the same time, a woman on the other side of the hemisphere is trying to start putting her life back together while her heart breaks a little more.
Posted by Irshlas at 8:28 PM No comments: 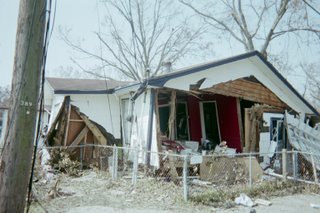 I felt like I should write something about Katrina. Everyone else is doing it and there’s more than enough pain to go around. I’m so tired of hearing stories from reporters with no clue. It truly is a matter of – "if ya weren’t there, ya don’t know." I’d like to jump on the bandwagon of those from the old neighborhood complaining about why New Orleans is getting all the press when Katrina didn’t destroy that city. (The levees failed. The government failed. Bureaucracy and poor planning won. THAT’S what destroyed New Orleans. On the night of 8/29/05, the city of New Orleans was okay. My neighborhood? It was gone.) But like I said, there’s more than enough pain to go around. I promised I wouldn’t continue that diatribe. Not today. Today is a time to mourn. More than 1800 people died in at least five states. You can’t fathom that kind of loss of life. The bulk of the bodies in my county were pulled from my side of town. Death has a smell….. the kind you can’t get clean.

I tried putting my feelings about today into words, but my words just ramble. I’m not a good enough writer to do any of it justice. So I posted the picture above. That's what was left of my house, taken Labor Day weekend 2005. It was Saturday after the storm before I was able to see the damage myself. That, my friends, is what a wall of water 28 feet high does to a structure. In case you were wondering, a marble coffee table, a few outdoor garden statues and a few china plates were all that we salvaged. A lifetime of memories destroyed.

I thought I might share what I miss the most about my former life. Here’s a snapshot:
· sitting on my front porch, enjoying a drink, watching the world go by
· the rock garden I built all by myself in my front yard
· my pictures, all of my pictures, 31 years worth of pictures
· my job where I worked for seven years that I had to leave because I had no place to live
· my friends who understood what it was like because they lived through it too
· my family because they are now a world away

I can’t begin to explain what was lost a year ago today. Sure, we can rebuild the physical structures and replace many of the lost “things.” But the community, the neighborhood, the soul of my hometown, is gone forever. It can’t be rebuilt because the people aren’t there. They don’t have the means to do it.

Whatever your thoughts on this disaster, take a minute to remember those who lost their loved ones, their communities, their security, their innocence. It’s been a year and we’re not over it.

To those who were there, I share this: Don’t worry, friend. We don’t HAVE to be over it. Ever.
Posted by Irshlas at 6:22 PM 1 comment:

I think all life is a matter or perspective.

I suffer from infertility. I use the word suffer on purpose. It’s an agonizing prospect of my life and one that I’ll never get over. So when I hear a woman say, “I’m pregnant again” and sound annoyed, I want to scream, “Then use a condom, you whore!!!!!!” But I don’t. I just keep walking through Wal*Mart (because that’s where all the pregnant whores seem to shop…..). The point is that she didn’t mean to be offensive. That’s her take on reality because that is how things work in her world. (Have sex – get pregnant.) In my world, having sex does not equal pregnant. Oh yeah…. and pregnant does not equal live baby…. twice. In my world, no one should complain about being pregnant. Those who do should instantly have a miscarriage. But I’m working very hard to change this perspective. (It’s an ongoing process, so bear with me if we have some setbacks in judgment from time to time.)

For me, infertility is painful. I don’t think that I will ever “get over it.” I have learned to accept that adoption doesn’t cure infertility. It only cures being childless. These are two different issues. I can’t honestly say that I’m still hurt that my husband and I may never have a living biological child together. His eyes, my mouth, his height, my feet. I mourn this loss in a real way on a constant basis. I understand that adoption will not make that pain go away.

Adoption does, however, allow me to focus my energies in a more positive manner. It gives me the chance to be a mother. I am acutely aware that this chance comes only out of the pain of another woman. I wish this wasn’t the case. I could tell myself that she never wanted this baby and is thrilled that she doesn’t have to raise him. But the reality is that she probably desperately wanted to keep this child and, for whatever reason…. poverty…. her age…..the circumstances of his conception,…… whatever the case, it just wasn’t possible. So now, I am being given the opportunity to raise this little boy. Thank you just doesn’t seem to cut it.

There has been MUCH debate recently on the adoption/ adoptee blogs I read with regard to adoptive parent guilt, acknowledging birthmother pain, etc. I will say that I had very strong reactions at first and wrote several scathing blog entries. But I chose to wait and seriously think about what I wanted to write. I’ve read many enlightened posts from various sources. I haven’t agreed with everything I’ve read but I welcome the chance to see more than one point of view. (What’s the point of writing only to be read by those who agree with you? Who learns anything that way?) The overriding sentiment that I come away with from reading these posts is that perception truly IS reality. (I know – no brainer there, huh?) We all come to the table with the sum total of our experiences. Of course our filters are set in a specific way. But the general populace appears to be unwilling to admit this.

Why is that birthmothers and adoptive mothers appear at odds? At what point did we become enemies? I feel like I’m watching the Springer show. Picture two women fighting over the jerk in the middle. I’m always thinking, “Why aren’t they beating the hell out of him and then going out for a drink together?” I can’t help but think both moms in the adoption triad should find the middle ground – the children – and work from there. In my case, I won’t ever be able to sit at the proverbial table with my son’s birthmother. Funny that I’m her biggest fan and most loyal supporter and we’ve never even met. More’s the pity…… but, I am trying to mentally prepare for the questions he may some day ask. Even more so, I’m trying to prepare for the questions everyone else may ask. Maybe I'll start asking some of my own.....
Posted by Irshlas at 12:55 PM 1 comment:

So I’m trying my hand at this blogging thing. For some time now I’ve been reading the blogs of others. Being a “lurker,” as I’ve learned we’re called, I’ve been able to enter the lives of hundreds of people I would have otherwise never been able to “meet.” Some of the posts I’ve read have angered me beyond belief. Others have moved me to tears. Many have been the fodder for conversations between the hubby and myself. As time went on, I realized that I often have a lot to say. Opinionated is often a word I hear used to describe me. I’d like to think I have something to offer to the online community….. so what the hell – here goes.

I should start by saying that I don’t know a THING about creating web pages. I have no idea how to add cute little pictures and emoticons everywhere. I see lots of creative little things all over others’ blogs and think, “I’d love to do that.” Sadly, I just don’t have the knowledge to do it just yet. Maybe I can learn. If you’ve got advice, please pass it along. Knowledge is power, right?

I’m trying to think of this blog as a diary of sorts. I’ll write down whatever is on my mind at that moment. If someone happens along and reads it, great. If they decide to leave a comment, even better. Hopefully I won’t offend too many people. I probably will. For that, let me apologize now. It’s not my intention to cause pain to others. I really just feel like it would be nice to have an outlet for the myriad of ideas that float around my head on a daily basis. And I’m not real knowledgeable on “blog etiquette,” so if I make a faux pas, please let me know… but gently please. I tend to bruise easily.

I truly hope no one in the “real world” finds this or figures out who I am. If that happens I’d like to say now – please don’t out me. Just keep it to yourself. Sometimes a girl just needs a place where everybody knows her name…. and well, Cheers closed years ago.

Over time I will most likely begin writing my biography here. Not in a self-inflated kind of way. Just more that I’m hoping someday, somebody might find it important to know what I was thinking at this point in my life. Some people find me interesting. Some even find me entertaining. Maybe you’ll be one of those people.

As for the name of the blog – “Kewl Beans” is a phrase that I’ve said as far back as I can remember. I honestly don’t know when I started saying it or where it came from. I’m sure it’s from an ‘80’s movie. If you think you know, feel free to pass along the info. I’d be interested to have another piece of my puzzle completed. The blog, just like me, is a work in progress.

So stop by the Kewl Beans Place, pull up a chair, grab a drink and join our lunacy!
Posted by Irshlas at 7:40 PM 2 comments: